THE BLOOD OF LAMBS : a former terrorist’s memoir of death and redemption by Kamal Saleem with Lynn Vincent. 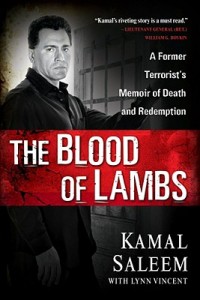 “The Blood of Lambs reveals the true inside story of the making and mind-set of a Muslim terrorist. Though his ties with terrorism were severed more than twenty years ago, it was not until 9/11, when radical Muslims rained terror on American shores, that Kamal Saleem stepped out of the shadows and revealed his true identity. Today, he is a different kind of warrior. He now stands on the wall and shouts to America, “Open your eyes and fight the danger that lives among you.” Kamal is now an American citizen and has embraced the Christian faith he once sought to destroy. He consults with federal law enforcement agencies and speaks on the dangers of radical Islam at venues across the country.” [Amazon]