“Abnomaly grabs the reader and refuses to let go. One is never completely sure what is fact and what is a horrifying virtual reality. This is sure to be a favorite of teens everywhere.” — Heather Burch, author of the critically acclaimed Halflings Series

“A beautiful story that has me wondering if I would have the strength to be an Anomaly. Fans of James Dashner’s Maze Runner will love Krista McGee’s Anomaly.” — Jon Lewis, author of the C.H.A.O.S. trilogy 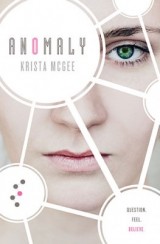 Thalli has fifteen minutes and twenty-three seconds left to live. The toxic gas that will complete her annihilation is invading her bloodstream. But she is not afraid.

Summary: “Living in a post-apocalyptic State that has supposedly eliminated emotions, Thalli is slated for annihilation by the Scientists when her carefully-kept secret that she is an anomaly becomes known, but when she becomes their test subject, instead, she learns that she may actually be part of a Creator’s greater design.” — LOC